There is a general accepted understanding that firms deliver and create value…which is complete corporate bullshit. This is a radical statement, but as you read further you will come to understand this point of view.

What is Value anyway?

The definition of value is perhaps the most ill-defied and elusive concept within the field of service management and marketing. There are several holistic approaches that tries to conceptualize the concept of value, though without any further establishments. This means that even though the word value is widely used in our everyday life, nobody really know what it is. Taking this abstract concept for granted is pure hipocripsy that serves no one well.

So what is my proposal, then? How do we get out of this swamp of confusion? There is a solution. It has been suggested that the focus should shift towards the value creation process, which in general terms is defined as a “process that increases the customer’s well-being, such that the user becomes better off in some respect “.

Value in Use – The Customer Delivers the Value

According to Grönroos and Voima (Click for full article) value emerges from a value-in-use perspective. Where the concept of “value-in-use” refers to the idea that it is explicitly only the consumers of a service, who has the exclusive right to determine and control the final and true value of a service, not the providers (see video 1). Thus value is generated and “created by users (individually and socially), during usage of resources and processes (and their outcomes)”, where usage is referred to as physical, virtual, or mental process, or a mere possession attribute. However, the providers of a service do play an important role as a provider of potential value, or as a value facilitator.

This view is aligned with Lusch and Vargo who also emphasizes that enterprises cannot create value alone themselves, but are instead very capable of deriving new lucrative value propositions. Therefore, an all-encompassing process in the aspect of value creation emerges, where all parties involved are co-creators of value.

Grönroos and Voima elaborate and develop this idea further and forms a frame-work constituting of three distinguishable value spheres: provider sphere, joint sphere and customer sphere (Figure 1). Despite the fact that the framework is showing and implying a linear structure, it does not apply in practice because the value spheres are dynamic and might show different sequences and patterns for realising the value creation process. In addition, the framework does take into consideration the two perspectives of value delivery (production) and value in use (value creation), which are illustrated in Figure 1.
The provider sphere generates only potential value or a value proposition, which a cus-tomer hopefully later extract and converts into real value (-in-use). Thus, it is justified that the fundamental function of the provider is to work as a value facilitator. 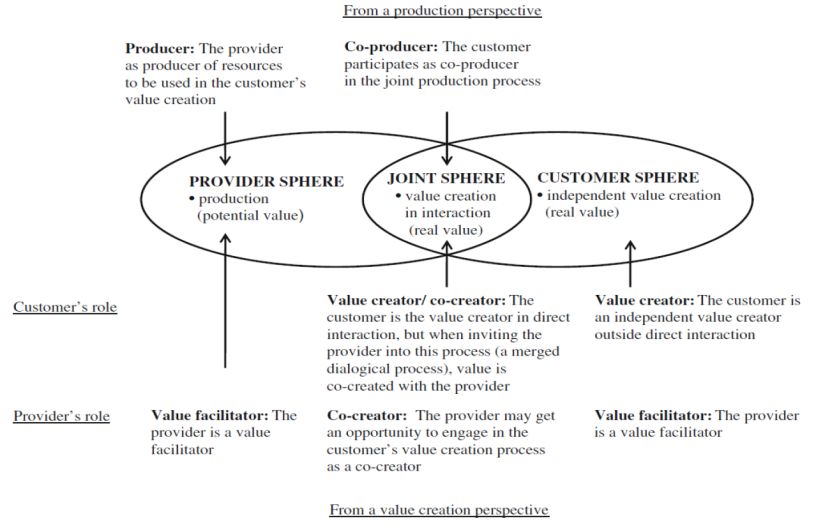 Figure 1. Value creation spheres.
The joint sphere is a union formed between the customer sphere and the provider sphere. The sphere represents the value creating process that emerges from interaction and dialogs between the two aforementioned spheres, which interacts either through direct or indirect procedures. Above all, the customer is always solely in charge of the actual value creation, although the provider may influence the process as a co-creator but only by implementing direct interaction methods. Hence, it is important that the provider truly understand how the customer uses and combines resources, processes, and outcomes in its interactions. This in order for the provider to shift from a mere value facilitator to a co-creator of value.
In the customer sphere the value creation appears as sole or independent process. In reality it “may take several forms in multiple temporal, spatial, physical, and social customer contexts, and it can encompass both individual and collective levels”. Therefore, by independently accumulating experiences, resources, and processes into different contexts; the customer is able to generate value(-in-use) paradigm. In addition, it is worth mentioning that the value is influenced and affected (indirectly) by the presence of a wider customer network or ecosystem, although this is always beyond the providers control.

The Customer is Always Right

It can be justified that a company or a firm cannot create value. Instead organisations must realise this new perspective of value-in-use, where “the customer is in charge”. Therefore the cliché – “the customer is always right” – has more truth into it than one might think. This is especially true in today’s modern time, where the traditional goods-dominant-logic is rapidly losing foothold to the service-dominant-logic (see my last blog post- What is a Service). Mainly because consumers have more rights and have more to alternatives to chose from.

Finally, I praise the great professor Grönroos, whose inspiring video can be found in the beginning of this article.  He is truly a forerunner in the field of marketing and is a master at delivering his points, such as one cited below.

” ‘we deliver value’ is Garbage”

On that note, we cannot and will never be able to deliver value. However by being a Value facilitator or Co-creator, one can improve the probability and circumstances that will/may contribute to increased value.

Hello there! My name is Drill and I am a true wisdom junkie. In this blog I will present ideas of all kinds that I have come across and that I believe are worth spreading. Follow my process of "drilling" deeper into familiar and new domains.